They think it’s all over…

This was a performative project with and for Maidstone United Football Club and its fans: their experiences, feelings, hopes, and dreams for the future.

We attended home games and met the Gallagher Stadium community. We got to know big and small supporters, those who have been following the club for decades and those who have just started. We chatted, made badges, collected impressions and feelings, and recorded personal stories. The final celebratory event coincided with one of the home games and was made up of a series of small but sweet exchanges. Carrying mini-football pitch trays we invited fans to listen to some of the mini-stories we had recorded, asking supporters to write down a wish for the club and releasing it skyward on a yellow balloon. As a parting gift we gave each person a small piece of a larger puzzle, because MUFC is more than the sum of its parts.

They think it’s all over…
Gallagher Stadium, Maidstone

They think it’s all over… was commissioned by FrancisKnight for their larger, cross-arts project The Rise of Maidstone United (funded by the Arts Council’s Grants for the Arts Libraries Fund awarded to Kent Libraries, Registration and Archives). The project was supported by MidKent College, Maidstone United Football Club and FrancisKnight.

You can read our project diary here.

You can listen to some of the mini stories we recorded with Maidstone United fans here. 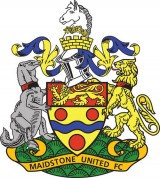