This was a project based on psychogeography. We collaborated with young people across the U.K.: collecting impressions of their home cities, as well as expressions and slang words specific to their area. The collected materials were our stimuli to create a series of small performances and installations. Taking the persona of lost tourists, we embarked on a journey to map all of the cities across Canterbury; at each location we unpacked an installation or performed a short scene. When the project transferred to Liverpool’s St. George’s Hall (as part of the 2008 Capital of Culture celebrations), it was adapted to this indoor setting. We placed 17 suitcases around the buidling as lost luggage.  Each one contained a micro-installation representing on of the cities participating in Portrait of a Nation. Walking around on our own or as a group, we talked to the public, inviting them to write down thoughts, impressions and comments onto luggage tags, suitcases and costumes.

As part of the project we also created a series of postcards using some of the slang words collected: 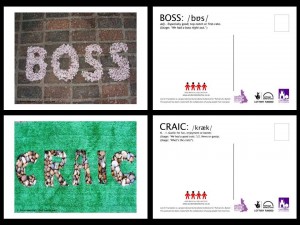 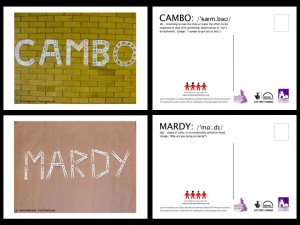