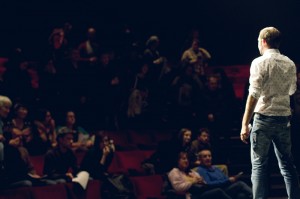 Emily Parrish & Filipe Gomes delighted us with their storytelling and music collaboration Loki. Spoken word, sound and music will take us on a journey through Norse mythology alongside the infamous trickster character.

tattenbaum-deluca shared an extract of their full piece tatty-del are making it work. Watch a trailer for it here.

dot dash scratched the latest piece they are developing: Ephemeroptera

Jane Gauntlett, who is a member of Sublime and Ridiculous, presented In My Shoes. This immersive experience for one person at a time uses video-goggles to tackle Jane’s experience of living with epilepsy. Watch a short feedback video of In My Shoes here, and Jane talk about herself and the work here.

Just before taking it to The Place in London, CoDa Dance shared an extract of their latest piece 12 Months On. Watch a trailer of it here.

Daniel Somerville  was commissioned to create a piece in response to the new Colyer-Fergusson concert hall.

The Canterbury Masque was a personal reflection on Canterbury in the style of an English Masque, that responded to the space of the Colyer-Fergusson concert hall with allegory, history, anecdote, music, dance, drama, politics and a celebratory ending. We were blown away by mythical figures, great men and women from history, battles, transformations, fantasies, spectacle and song. The story of one of Kent’s greatest sons, Alfred Deller, kicked off reminiscences from Somerville’s youth and in an allegorical playing space where characters from Shakespeare rubbed shoulders with politicians and pop stars he wrestled with religion and gender while continuing his exploration of English identity begun in Oh! England, from Pot Luck in Faversham in 2011.

(Click on the images below to enlarge the thumbnails.) 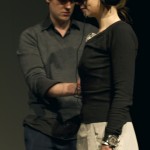 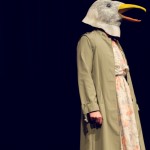 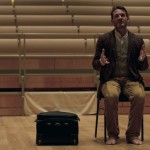 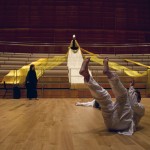